Mahtomedi  is a city in Washington County, Minnesota, United States. The population was 7,676 at the 2010 census.Mahtomedi is considered to be a suburb of St. Paul, and is located between St. Paul and Stillwater. 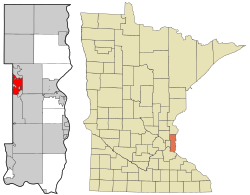 Education Top in the state of Minnesota

In addition to the Mahtomedi Public School District, Mahtomedi also is home to the St. Jude of the Lake School. St. Jude’s is a private catholic school that educates students from kindergarten to fifth grade. It also is the only catholic primary school offering an International Baccalaureate Program in the Midwest.

Half of Century College, a member of the MNSCU system, is located in Mahtomedi. The other half is located in White Bear Lake, which is the mailing address for the college. Century Avenue, which runs north and south, is the dividing line between Washington and Ramsey counties and between White Bear Lake and Mahtomedi. A long footbridge extends between the West Campus and East Campus of Century College.

The school colors of Mahtomedi Senior High School are blue and gold and the mascot is the Zephyr. Mahtomedi is well known for its girls’ and boys’ soccer and also for its high school football team. The girls team won the state championship in 2004, 2005, 2006, 2008, and 2017. The football team won the state championship in 2005 in an overtime win against the Academy of Holy Angels. On November 5, 2009, Mahtomedi’s Boys Varsity soccer team won its first state championship against Hermantown. The Mahtomedi Zephyr gymnastics team has also won state 10 times, winning their first in 1982. The Zephyr mascot originally came from the 1930s car Lincoln Zephyr. However, the Zephyr mascot currently references Zephyrus, the Greek god of the west wind.