Cottage Grove is a city located 10 miles (16 km) south of Saint Paul in Washington County in the Stateof Minnesota. The city lies on the north bank of the Mississippi River, north of the confluence with the Saint Croix River. Cottage Grove and nearby suburbs form the southeast portion of Minneapolis-Saint Paul, the sixteenth largest metropolitan area in the United States, with about 3.52 million residents. The population of Cottage Grove was 34,589 at the 2010 census.

The city is linked by U.S. Highways 10 and 61 and has a comfortable commute to both downtowns and the I-494 Strip in Bloomington. Once a rural township known for the state’s first creameries and wheat production, the area was served by rail lines, river shipping, and grist mills. 3M has been operating a production facility in Cottage Grove since 1947.

Cottage Grove is ten miles southeast of St. Paul. It is accessed by U.S. Highway 61 and Interstate 494.

The city has more land adjacent to the Mississippi River than any other city in Minnesota. The city is also bordered by Woodbury to the north, Hastings to the south, St. Paul Park to the west, Newport to the northwest, and Denmark Township to the east. The city is approximately half an hour at posted speeds from the Minneapolis-St. Paul International Airport. The southeast part of Cottage Grove is within 5 miles of the Wisconsin border. 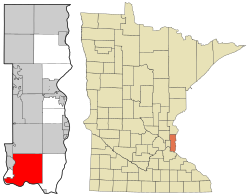