Forest Lake is a city in Washington County, Minnesota, United States. It is twenty-seven miles northeast of Saint Paul. The population was 18,375 at the 2010 census. The 2016 population is 20,216. It is located on one of Minnesota’s 100 largest lakes. The lake serves as the source of the Sunrise River.

Interstate 35 and U.S. Highways 8 and 61 are three of the main routes in the community.

Other main routes include County Road 2–Broadway Avenue. Interstate 35 splits into Interstate Highways 35E and 35W just south of Forest Lake in the nearby city of Columbus. The junction is commonly referred to as the Forest Lake Split. The Forest Lake Split was the scene of the August 11, 2003 death of Herb Brooks, coach of the gold medal-winning 1980 U.S. Olympic Hockey Team (Miracle on Ice).

Forest Lake has a high population of northern pike, largemouth bass, walleye, and many pan fish (blugill, crappie, and perch). It also holds muskie, while the numbers are relatively low, the average size is becoming quite large, making for a trophy fishery. The city formerly hosted an annual ice fishing tournament known as Fishapalooza. Forest Lake was known as the bass capital of Minnesota during the 1960s and 1970s, with the official Minnesota bass opener taking place at Forest Lake several times. The ice fishing contests held on Forest Lake in the mid-1990s were reported to be the largest in the country. 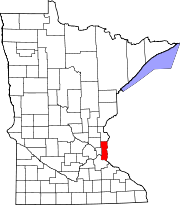