Brooklyn Center is a city in Hennepin County, Minnesota. The city is on the west bank of the Mississippi River on the northwest border of Minneapolis. The population was 30,104 at the 2010 census.

Brooklyn Center is one of the original inner-ring suburbs of Minneapolis–Saint Paul, the sixteenth largest metropolitan area in the United States, with about 3.52 million residents.

Formed as the center of local trade in the former Brooklyn Township since 1873, the rural area farmed market gardening for the nearby growing population of Minneapolis. The village of Brooklyn Center incorporated in 1911, splitting from Brooklyn Township, to avoid annexation from the expanding city of Minneapolis. It incorporated as a city in 1966. The city became a bedroom community and industrial job center following postwar growth. It was the site of the regional mall Brookdale Center. The headquarters of Caribou Coffee moved into the city in 2004.

Interstates 94 and 694 and Minnesota State Highways 100 and 252 are four of the main routes in Brooklyn Center. 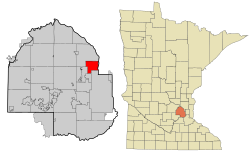 The Global Operations Center of MoneyGram is in Brooklyn Center.

When the Minnesota Educational Computing Consortium, also known as MECC, existed, its headquarters were in Brooklyn Center.

Minnesota Martial Arts Academy, now known simply as the Academy, an MMA training center, is in Brooklyn Center. It has trained such notable fighters as Sean Sherkand Brock Lesnar.

Brooklyn Center is home to the FBI’s new Minneapolis field office, which began construction in August 2010.

According to Brooklyn Center’s 2011 Comprehensive Annual Financial Report,[12] the top employers in the city are: