APPLE VALLEY CONTRACT FOR DEED HOMES APPLE VALLEY, MN Apple Valley is a city in northwestern Dakota County in the State of Minnesota, and a suburb of the Twin Cities. The city’s population is 49,084, making it the 18th most populous city in Minnesota. In 2013, Money Magazine named Apple Valley the 17th best place to live in the United States, up from 20th in 2010, 24th in 2008 and 28th in 2007. Municipalities and communities of Dakota County, Minnesota. 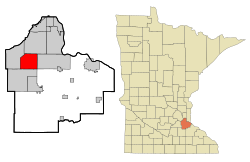 EDUCATION There are six elementary, three middle and three high schools in the city, all operated by Independent School District 196. In addition to the two comprehensive high schools, Apple Valley is home to a magnet school open to 11th and 12th graders, the School of Environmental Studies. In fall 2007, Independent School District 196 opened three elementary-level magnet schools: Cedar Park Elementary, which will become a Science, Technology, Engineering and Math (STEM) magnet; Diamond Path Elementary, which will have an International Studies theme, and Glacier Hills Elementary, with an Arts and Science theme. Some students attend public schools in other school districts chosen by their families under Minnesota’s open enrollment statute. Apple Valley Contract for deed Homes Independent School District 196 cityofapplevalley.org mnhomescontractfordeed.com Click here to view all the homes for sale in Apple Valley
Back to Login